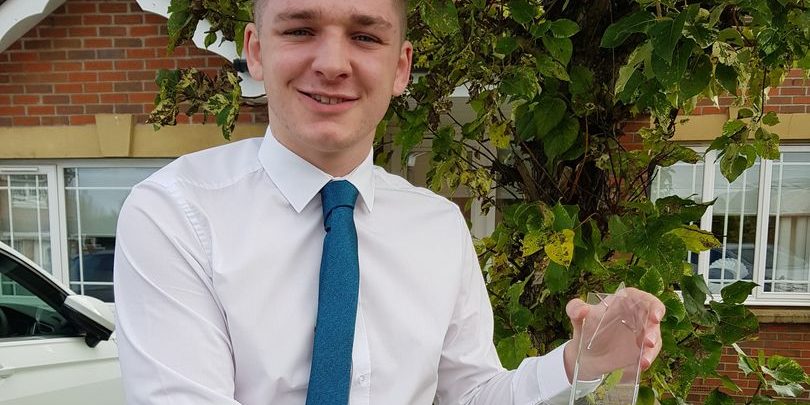 Our very own apprentice, Kieran Duffy, was crowned Apprentice of the Year in the 2020 Lanarkshire Business Awards.

Kieran started his apprenticeship with Dougall Baillie three years ago as a trainee technician, and has worked hard to be where he is now.

Kieran, from Wishaw, said: “Originally I was going to go straight from school to university, but I was also very unsure of what I wanted to do.

“It was actually my girlfriend who saw the advert in the paper for the apprenticeship in the paper and I applied for it.

“Engineering has always been a field of interest for me, so it was something I thought I’d enjoy, and luckily I have.”

In his daily responsibilities, Kieran works with an engineer, working on design packages.

And as part of his apprenticeship, Kieran has had the opportunity to attend weekly classes at college and university which means he will be fully qualified at the end of it.

“I really think that this was the best route for me, I have learned so much through working, and I get the bonus of having a degree at the end of it.”

And in recognition of his hard work, Kieran won the prestigious prize of apprentice of the year in this year’s Lanarkshire Business Awards.

He was one of four who won the award this year, as they have each of the four finalists the award in light of the ongoing global pandemic.

“The business awards usually get in touch with companies and see if they have anyone who meets the criteria for the categories,

“Dougall Ballie decided to nominate me for the award, so gave me the form to fill in and told me to apply.

“I was honoured to find out I had made the top four, out of probably hundreds of applicants across various industries.

“The event was meant to be in May, but that was cancelled, and we didn’t really know what would happen.

“The LBA kept in touch throughout, and then told us that they were going to give all four finalists the prize because there would be no ceremony.

“This will help set me apart from the others in the industry, as well as do good for Dougall Ballie as I am a representative of them.”

BACK TO NEWS
Go to Top